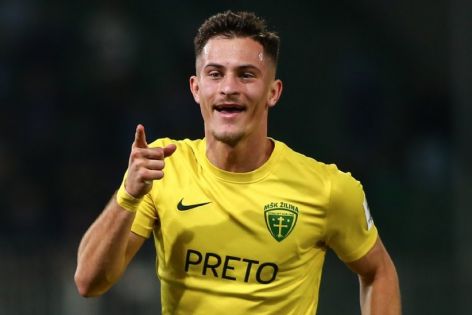 What a game for Adrián Kaprálik! He managed to score all goals of his team to secure 4-1 victory against defending champion Slovan Bratislava last night.

One could not imagine better game for Adrián. He was workign hard to improve his scoring record and Sunday night was a great revenge for him. His efforts led to four goals in a single game, very tough one against Slovan Bratislava which Žilina failed to beat in four consecutive years.

Kaprálik booked hattrick within 35 minutes, opening the score just after 6 minutes. He scored 2 with his left and 2 with right foot.

"Beating Slovan, earning points and, of course, scoring four goals is something to remember for me. I can´t feel better than tonight," admits Adrián in front of TV broadcasters.

Following Sunday, the 20-years old turned to be productivity leader of his team, reaching 6 goals and 2 assists in 17 league games. Another goal he added in cup game, making it total 7+2 in running club season.

Adrián, big congratulations and we wish you good luck in the season´s remainder.