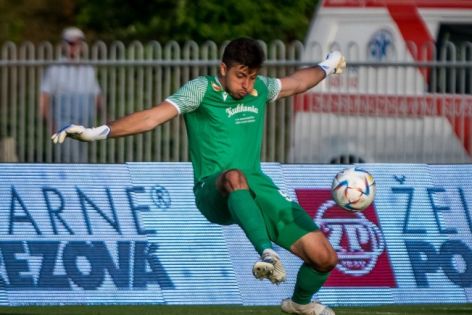 Goalkeeper Samuel Petráš did not record defeat in any of his seven appearances for loanee club FK DAC 1904.

MŠK Žilina-brought up keeper was loaned to Dunajská Streda for one season. It took few weeks for him to get into starting XI, but after he did, DAC have not lost a single game.

"The stats is interesting, however I would rather have more wins than draws," admits Petráš, who earned also 3 clean sheets.

"It´s just my personal statistics, much more important for me are team successes. Therefore I would exchange some of my shutouts for more points in the table."

1,92 metre-tall goalkeeper is summing his loan so far as very positive.

"There are two main points of view of my loan. From team point of view, we alternate between good matches with good performance and weaker ones. This makes me little bit sad, because we would like to be on higher position."

"The second is my personal point of view. I feel very well here and I have moved in my perception of football little bit further thanks to the DAC infrastructure and the coaches who work with me," says 23-years old, who can compare two top Slovak clubs with rich history and very good Academies.

"There are still some differences you can see. For example, here in Dunajská we have so much nationalities and different languages inside the team. So you have to get used to it. What I like is that bot teams, Žilina and Dunajská, focus on playing offensive and attractive football and this is what people like."