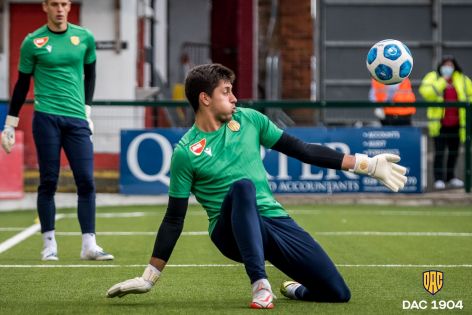 4th matchday of Slovak Fortuna league was the first one when Samuel Petráš made it into the starting XI.

Goalkeeper, who was brought up in MŠK Žilina and earned several international apps for Slovakian Youth, did excellent job in goalless draw vs. Podbrezová.

"I am happy not to concede a goal, although my smile would be wide if we had won," admits Samuel in front of TV cameras after the final whistle.

"We have to respect the qualities of the opponent as well. They have promoted last season into the first division and show they have fine quality inside."

It´s been a month since Samuel signed year loan deal with FK DAC. Too early to sum-up, Petráš can say only positive comments about his new club.

"The facilities, sessions and everything is on high level. There is a big competition in the squad for strating XI and that is something which helps you develop. I am doing my best to be ready whenever needed," added well built 192cm tall keeper with good passing skills.