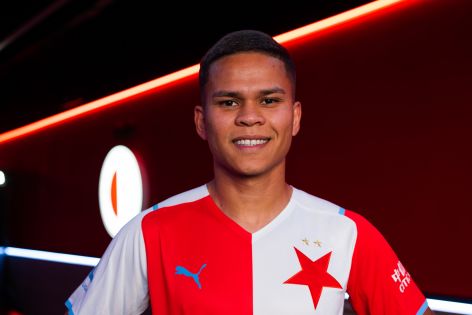 14 goals, 8 assists, a plenty of nominations into Best XI of the week, but especially good performance of Ewerton gave basis for great transfer from FK Mladá Boleslav to SK Slavia Prague, which was officially announced on Friday afternoon.

Ewerton started drawing his senior football path in summer of 2016, when he joined Slovak side ViOn Zlaté Moravce from Brazilian 4th tier side EC Sao Bernardo. Following the transfer to FK Mladá Boleslav and loan in Pardubice, Ewerton attracted attention of the best clubs in the country and also other big clubs from abroad.

"I am very happy to be a part of such a great club as Slavia Prague. I have always followed the team as they play attractive and good football. My focus is to play well and help the team achieve good results in any competition. I hope to be essential part of the team," says Ewerton.

"I would like to thank my representatives, Football Service Agency and Unzueta Sports for good cooperation throughout the years, because only thanks to them I can now live my football dream in Europe," admits Ewerton, who has signed 3 years contract with Slavia Prague.

Few days before coming to Prague for new season, Ewerton made another transfer in personal life - having married his fiancée Karoline.

"Six years ago, we started cooperation with Brazilian partner and Ewerton was one of the first players we brought to Slovakia. Although he came from Brazilian fourth tier side, we could see some potential in him. My thanks go to FC ViOn Zlaté Moravce, which were Ewerton´s first destination, and especially to club owner Viliam Ondrejka, who created great conditions for player´s future developement," says on behalf of FSA Milan Lednický.

"Ewerton attracted many clubs during the summer transfer window. We recieved bids from several clubs all over the world. The player considered all options and finally picked Slavia Prague as his new destination. Following several negotiations with club board we signed 3-years contract on Friday afternoon," concluded FSA chairman.

Ewerton, we wish you good luck in personal and sporting life and only the best with the great new team.