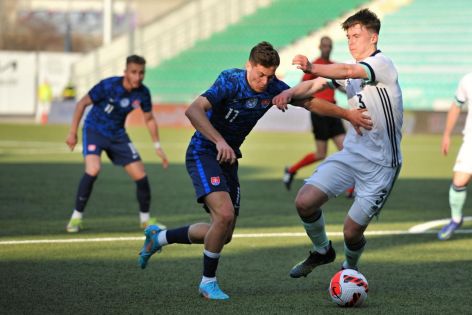 Team Slovakia U21 is still fighting for European championship ticket following the restrictions against Russian teams.

"We are satisfied with three points. Northern Irish team was fighting hard for a draw, but I think we deserved that victory because almost all the time we were better team. We missed some good opportunuties and that´s the reason why the score was open until the very end," sums up Adrián, the best player on the field.

Irish side managed to level the score and missed big chance for 1-2. From the counter-attack Adrián took the ball and crossed into the box, where one of the defenders knocked the ball with a hand what led into penalty kick.

"We were still pushing the opponent and put all the efforts into offense. The team-work was doing very well. Now we focus our minds on Tuesday game against Spain. It will be much different, we all know this. We are determined to make good result in front of our fans," added Kaprálik.