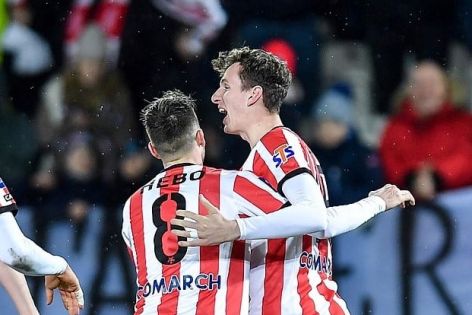 The start of 2nd leg found our players in a good shape.

Dynamo České Budějovice goalkeeper Dávid Šípoš was one of key elements in goalless draw against Sparta Prague, which turns out to be a great result for his side.

"I think we managed the game very well. The victory was very close, we were just unlucky in finishing. Sure, I am happy for the zero, it always gives you confidence especially against team like Sparta," admits Dávid after Saturday´s game.

Our agency could not miss the opportunity to see Šípoš live in České Budějovice. Dávid´s father Pavol, former first league referee, was on the stadium as well.

Ewerton of Mladá Boleslav was doing the best to fight some points against Baník Ostrava (2:3). Match plan was seriously harmed after the bad start when Baník earned two goals lead. Ewerton was involved in the first goal of his team, when he started the breakaway on the left side and, second goal he scored from penalty.

"We didn´t deserve this result. One could see that on the field was different than the score shows. We just failed in scoring goals, there were some very good chances, but hopefully we make revenge in next game," says Ewerton, who scored his 10th seasonal goal (7 in league, 3 in cup).

Striker Filip Balaj of Cracovia came in for injury time against Polish topseeded Lech Poznan and he needed only two minutes to level the score for final 3-3.

Considering the 1-3 during the second half, the draw seems like a small victory for Cracovia.

"We expected very tough game. Although we were two goals down, we kept on fighting. I am so happy for the finish. It´s been my first goal in Cracovia and I think it came in a right moment. It helped the team," says Filip, who typically scored header.