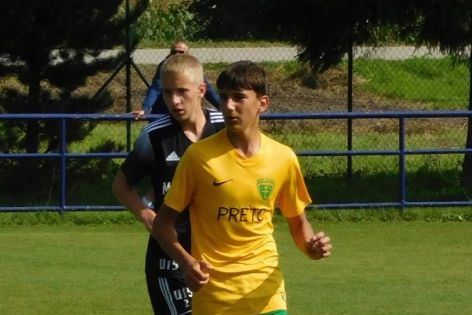 René Roháč, 14, has made his first career transfer.

Topoľčany-born midfielder came into crossroad when he had to decide about his football future. "I love football and I want to make my dream come true," says René, who had been a target of several top division Academies.

"We were talking a lot with my parents, considering pros and cons, everything. I was impressed by Žilina and their facilities for young players. At first stage, I was visiting the place occasionally, for some training and friendly games. Then we decided to sign for MŠK," describes René the circumstances of his move.

It´s been half year since coming to Žilina. Coming from the bottom of Slovak second division into top of the first tier turned out to be a good challenge for young player.

"From the beginning I had to get used for new things. I was prepared little bit from pre-season. Step by step, day by day, I felt it´s getting better and better. I would like to improve my skills and help the team achieve good results."

René is left-footed offensive midfielder. He can play on other positions as well, where he can use his speed and skills.

"I would like to improve many things, especially the right leg. I believe that I came to good place where I can do that," admits René.

Actually, he scored 3 goals in 9 games for U15 cathegory. At the 1-leg finish, he earned debut for U16 and scored immediately.

We wish you good luck in the new team.