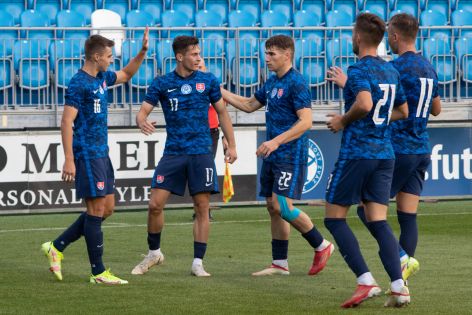 Adrián Kaprálik did not miss in starting XI.

"It´s been quite difficult game, especially because of the ground condition. I was washed out after the game," admits Adrián who scored the second goal.

"I took the ball on the right side and fired on the far post. Keeper could not see much because the ball flew between defender legs."

Adrián was involved in the opening goal when his shot was denied by the goalkeeper and teammate forward Trusa promptly delivered the ball into the net.

"I am happy for the result. We still hope for EURO final tournament. Of course it would be difficult, but we would find until the very end. We host both of the leaders in new year and these games show everything," added quick MŠK Žilina winger.

Apart of international and league games, Kaprálik, still 19 years old, makes efforts in UEFA Youth League where Žilina U19 fight against Kairat Almaty. The 2nd leg is set for the next week in Kazakhstan and Žilina defends tight 3-2 lead from home game.

We wish you good luck, Adrián.